Striped Bass Dogs is about the large stripers that are caught in Tangier Sound during Spring Striper season. Captain Harry Nield of Kingfish II Charters out of Wenona Maryland produced another great trip for his anglers. The spring striper season produces Large Stripped Bass that are referred to as Dogs by the captain and his anglers. Kingfish II Charters were trolling Spanky’s Tandem Parachute Lures off of Deal Island Maryland last spring. Trolling speed was between 2 1/2 to 3 1/2 knots and his lines were cracking off with some Real Dogs as you can see from the picture below. Captain Harry once again limited out for his anglers with 8 Dogs on this trip. Congratulations anglers from Spankyslures.com. Contact Kingfish II Charters at (443-871-3499) or visit his website at fishandduck.com to plan your trip now and land some Dogs with Captain Harry. 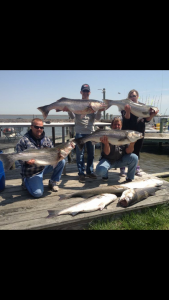