Striper Fishing Magical Moments aboard the Lady Katy with Captain Art Benton. This was a fall fishing trip from a few years back aboard the Lady Katy in Virginia waters. They left out of Crisfield Maryland to troll for large stripers in Virginia waters. The anglers that chartered this trip were treated to a Magical Moment that does not happen very often. After landing there limit of ten stripers the crew was attempting to pull in there spread of tandem lures and going to head back to the dock. Captain Art was attempting to pull away from the fish and go home. They had nine poles left in the water, when all nine poles got a strike. A member of the anglers who chartered the trip started filming the action. As it turned out all nine rods were hooked up with a fish on each the lures. That was Nine Tandem Spanky’s Lures with Two 35 pound to 45 pound fish on each set. We have hooked 5 to 10 fish at a time before but never 18 Fish At One Time with only 9 Poles in the water.  Anglers that know fishing this is something that does not happen very often with large fish. A big Congratulations to Captain Art and the angler who capture this on video from Spankyslures.com. For your Striper Fishing Magical Moments, Contact Lady Katy Charters at (443-614-3885) and join in on the fun. 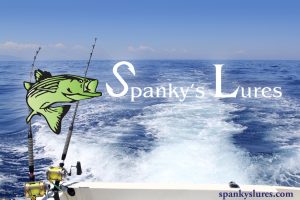