Tough Spring Stripers is about the 2017 tough spring striper season. Spring striper season has been very slow this season, however some boats are still managing to produce their limits. Captain Harry Nield aboard the Kingfish II is one of these captains. The tough spring stripers have proven to be very elusive this season for many anglers. Kingfish II has managed to land some quality fish with the skill of Captain Harry and Spanky’s Lures. The photos below show that Kingfish II produces some quality fish in this tough season, with the help of Spanky’s Lures. Captain Harry says that he is hopeful that more fish will show up soon, to turn a slow season into a great one. Captain Harry is one of the best captains in Wenona and Spanky’s Lures help make him even better to land the Tough Spring Stripers. Contact Kingfish II Charters at 443-871-3499 or visit his website at Delvarfish&duck.com to plan your trip now and watch Spanky’s Lures in action. 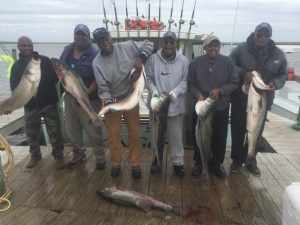 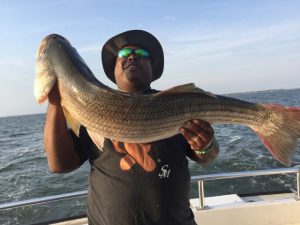